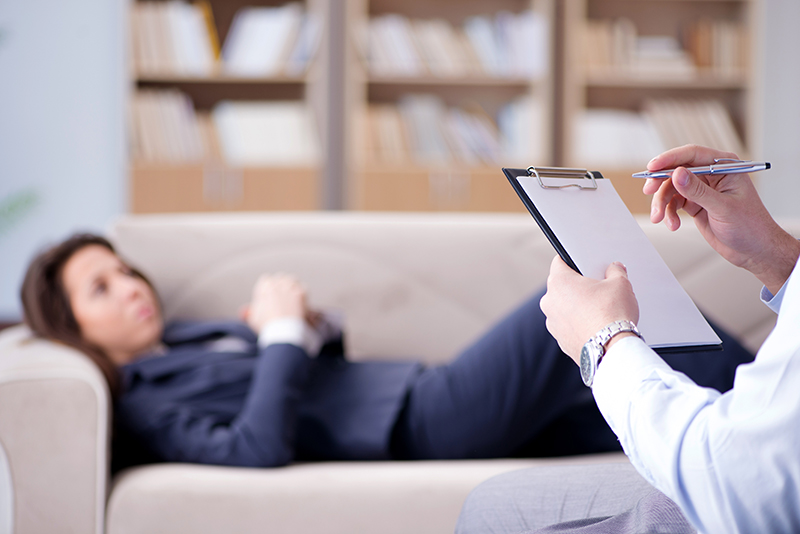 An adjustment disorder (AD)—sometimes called exogenous, reactive, or situational depression[2]—occurs when an individual is unable to adjust to or cope with a particular stress or a major life event. Since people with this disorder normally have symptoms that depressed people do, such as general loss of interest, feelings of hopelessness, and crying, this disorder is sometimes known as situational depression. Unlike major depression, the disorder is caused by an outside stressor and generally resolves once the individual is able to adapt to the situation.[citation needed] One hypothesis about AD is that it may represent a sub-threshold clinical syndrome.[3]

Anxiety is an emotion characterized by an unpleasant state of inner turmoil, often accompanied by nervous behaviour such as pacing back and forth, somatic complaints, and rumination.[1] It is the subjectively unpleasant feelings of dread over anticipated events, such as the feeling of imminent death.[2][need quotation to verify] Anxiety is not the same as fear, which is a response to a real or perceived immediate threat,[3] whereas anxiety involves the expectation of future threat.[3] Anxiety is a feeling of uneasiness and worry, usually generalized and unfocused as an overreaction to a situation that is only subjectively seen as menacing.[4] It is often accompanied by muscular tension,[3] restlessness, fatigue and problems in concentration. Anxiety can be appropriate, but when experienced regularly the individual may suffer from an anxiety disorder.[3]

Attention deficit hyperactivity disorder (ADHD) is a mental disorder of the neurodevelopmental type.[10][11] It is characterized by difficulty paying attention, excessive activity, and behavior without regards to consequences which is not appropriate for a person's age.[1][2] There are also often problems with regulation of emotions.[12][13][14] The symptoms appear before a person is twelve years old, are present for more than six months, and cause problems in at least two settings (such as school, home, or recreational activities).[3][15] In children, problems paying attention may result in poor school performance.[1] Additionally there is an association with other mental disorders and substance misuse.[16] Although it causes impairment, particularly in modern society, many people with ADHD can have sustained attention for tasks they find interesting or rewarding (known as hyperfocus).[5][17]

Bipolar disorder, previously known as manic depression, is a mental disorder that causes periods of depression and periods of abnormally elevated mood.[3][4][6] The elevated mood is significant and is known as mania or hypomania, depending on its severity, or whether symptoms of psychosis are present.[3] During mania, an individual behaves or feels abnormally energetic, happy, or irritable.[3] Individuals often make poorly thought out decisions with little regard to the consequences.[4] The need for sleep is usually reduced during manic phases.[4] During periods of depression, there may be crying, a negative outlook on life, and poor eye contact with others.[3] The risk of suicide among those with the illness is high at greater than 6 percent over 20 years, while self-harm occurs in 30–40 percent.[3] Other mental health issues such as anxiety disorders and substance use disorder are commonly associated with bipolar disorder.

Delusional disorder is a generally rare mental illness in which the patient presents delusions, but with no accompanying prominent hallucinations, thought disorder, mood disorder, or significant flattening of affect.[1][2] Delusions are a specific symptom of psychosis. Delusions can be "bizarre" or "non-bizarre" in content;[2] non-bizarre delusions are fixed false beliefs that involve situations that occur in real life, such as being harmed or poisoned.[3] Apart from their delusions, people with delusional disorder may continue to socialize and function in a normal manner and their behavior does not necessarily generally seem odd.[4] However, the preoccupation with delusional ideas can be disruptive to their overall lives.

Cyclothymia, also known as cyclothymic disorder, is a mental disorder that involves periods of symptoms of depression and periods of symptoms of hypomania.[3] These symptoms, however, are not sufficient to be a major depressive episode or a hypomanic episode.[3] Symptoms must last for more than one or two years.[3]

The cause is unknown.[2] Risk factors include a family history of bipolar disorder.[3] Cyclothymia differs from bipolar in that major depression, mania, or hypomania have never occurred.[3]

Treatment is generally with counselling and mood stabilizers such as lithium.[4] It is estimated that 0.7% of people have cyclothymia at some point in their life.[3] Onset is typically in late childhood to early adulthood.[3] Males and females are affected equally often.[3]

Major depressive disorder (MDD), also known simply as depression, is a mental disorder characterized by at least two weeks of low mood that is present across most situations.[1] It is often accompanied by low self-esteem, loss of interest in normally enjoyable activities, low energy, and pain without a clear cause.[1] People may also occasionally have false beliefs or see or hear things that others cannot.[1] Some people have periods of depression separated by years in which they are normal, while others nearly always have symptoms present.[3] Major depressive disorder can negatively affect a person's personal life, work life, or education, as well as sleeping, eating habits, and general health.[1][3] Between 2–8% of adults with major depression die by suicide,[2][7] and about 50% of people who die by suicide had depression or another mood disorder.[8]

Personality disorders (PD) are a class of mental disorders characterized by enduring maladaptive patterns of behavior, cognition, and inner experience, exhibited across many contexts and deviating from those accepted by the individual's culture. These patterns develop early, are inflexible, and are associated with significant distress or disability. The definitions may vary somewhat, according to source.[2][3][4] Official criteria for diagnosing personality disorders are listed in the Diagnostic and Statistical Manual of Mental Disorders (DSM) and the fifth chapter of the International Classification of Diseases (ICD).

Posttraumatic stress disorder (PTSD)[note 1] is a mental disorder that can develop after a person is exposed to a traumatic event, such as sexual assault, warfare, traffic collisions, or other threats on a person's life.[1] Symptoms may include disturbing thoughts, feelings, or dreams related to the events, mental or physical distress to trauma-related cues, attempts to avoid trauma-related cues, alterations in how a person thinks and feels, and an increase in the fight-or-flight response.[1][3] These symptoms last for more than a month after the event.[1] Young children are less likely to show distress, but instead may express their memories through play.[1] A person with PTSD is at a higher risk for suicide and intentional self-harm.

Schizophrenia is a mental disorder characterized by abnormal behavior, strange speech, and a decreased ability to understand reality.[2] Other symptoms include false beliefs, unclear or confused thinking, hearing voices that do not exist, reduced social engagement and emotional expression, and lack of motivation.[2][3] People with schizophrenia often have additional mental health problems such as anxiety, depression, or substance-use disorders.[11] Symptoms typically come on gradually, begin in young adulthood, and, in many cases, never resolve.

You are a step closer to a new you, where you feel empowered to start your journey on a positive path toward personal growth and well-being. Start your healing today...